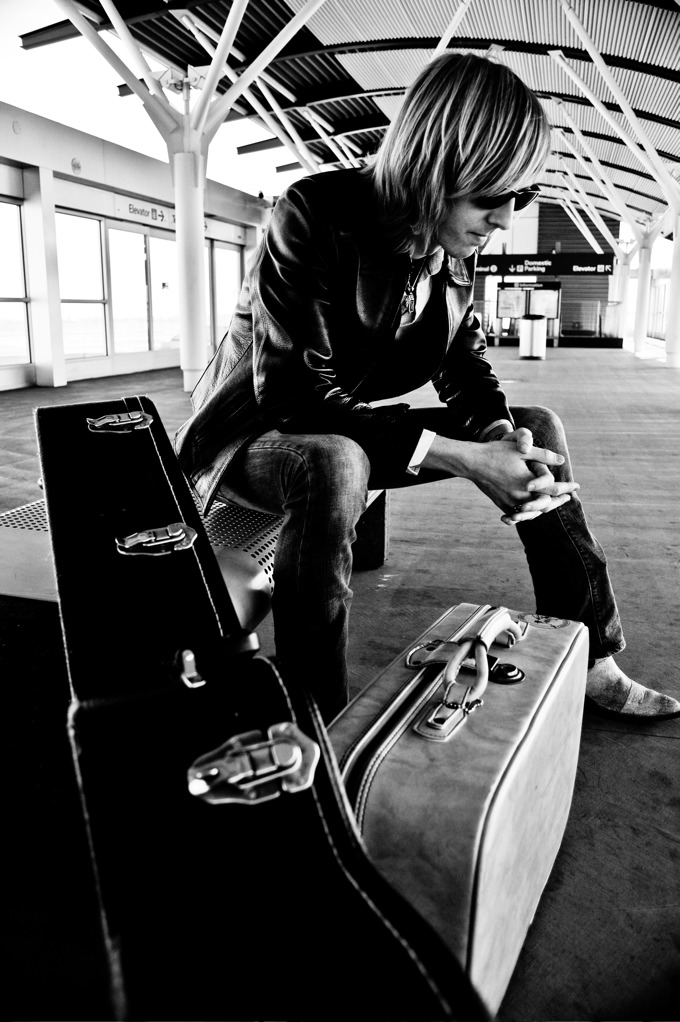 I bring passion and art into people’s lives.  I do what I love; I get a ton of shit for it by my friends and family.  But I can’t stop.  It’s a mixture of love and receiving guilt.  It’s not the status quo, and that’s very difficult for a lot of friends and family to handle.  I think they understand when they come to shows, but they don’t understand it when I’m sitting on the couch answering interview questions.  Haha.

I’m doing quite a few things right now.  When I started doing music full-time, I added a ton of work to my schedule.  I am really working on making a TON of contacts outside of my local area (although, I just realized that I’ve been neglecting my local scene).  I’m trying to give props to more local bands and hopefully we’ll all start collaborating again to make new music and play really solid shows around this area.  I’m also developing a new show.  It’s more character-developed.  My thought is that even MTV focuses on reality shows, so it’s time for each of my band members to have a really clear-cut identity onstage.  Fans want artists that they can explain to their friends.  Unfortunately it’s becoming more about the artist’s identity than it is the song or record’s identity.  The music business is definitely going through a “mid-life crisis” in the US.  People are more interested in immediate gratification.  Singles over albums.  iTunes.  Shopping in a record store for hours is dead.  People want an instant connection.  Character identity will do that… and then the songs will hopefully leave a lasting impression.  My goal is to have a mix of new fans that are interested in who the band is and old fans that are really in love with the songs.  Speaking of songs, I’m working on five songs right now.  I’m trying to write about 20 songs for the new album (we’ll take the best 11 or 12).

Life experiences and other singer/songwriters.  Every experience I go through is a potential song or piece of art.  Without life experiences, I’ve got nothing.  I sort of have to take a step back from work every now and then and just open myself up to getting out and experiencing people and life.  That’s not always easy to do.

Singer/songwriters such as Billy Mann, John Mayer, Matt Nathanson, and Ryan Adams have all inspired me.  I could go on for hours… but I won’t.

Because I work in entertainment, people think what I do is “all play” and “no work”… which is completely untrue.  There is so much work involved in the music business from writing to marketing to negotiating compensation to making contacts to updating website info.  It’s a full time job!  I would say that I spend at least 5 hours a day online promoting, making contacts, and updating.  I then play and write and practice.  I’m also committing to attending more local shows.  Local musicians need attendance and more love, and I haven’t been doing enough of that.  So on top of the 8+ hours of work every day, I definitely will add more local show support.  But don’t get me wrong, I love doing this job.  It’s just that people don’t understand what goes into it.

It’s changed the game… period.  I used to be a Store Manager for Wherehouse Music back during the N*Sync days.  We made a KILLING in selling their records, Britney Spears, Backstreet Boys, and Eminem.  I was also a Store Manager when Wherehouse Music was going out of business.  The digital medium has taken over.  iTunes is officially the NUMBER ONE music retailer in the United States.  For me, that’s a great thing.  I don’t have a distribution company getting my CD into stores across the country… but I have iTunes.  iTunes sells my EPs which means my music is available across the United States instantly.  I have the internet to promote shows from the comfort of someone’s couch.  It’s a wonderful marketing tool for local musicians.  On the crappy end of the internet is the piracy aspect.  I’m not necessarily opposed to piracy, but it has given a perception of “music shouldn’t cost anything”.  That sucks for artists that are trying to make a living (especially on a local level).  It’s a very fragile balance of promotion vs. making a living.  Because I’m not famous or on Top 40 radio, marketing can sometimes take the shape of giving away certain songs for free… just so people get a chance to hear my music.  At the same time, I’ve spent $10,000 making an EP and recouping my money is important as a business.

Persistence pays off.  Keep at it; keep fighting the good fight.  Don’t be afraid to take chances/risks.  Chances and risks are what got me the most opportunities in this business.  It’s so cliche for me to say that stuff, but it’s true.

Everywhere!  Haha.  You can find me mainly at http://www.brandontyler.net Some people only want to go to myspace, facebook, or twitter though.  I’m on all of those as well.  If you go to my website and scroll down to the bottom of the main page, you will find all of those social networking site links on the right.

I am in love with Dave Eggers.  He wrote A Heartbreaking Work of Staggering Genius.  He also wrote the screenplays for Away We Go and Where The Wild Things Are (see them both).  I’ve asked for his books for Christmas.  I intend on starting them Christmas day.  The books are Zeitoun and What Is The What.

One thought on “brandon tyler”