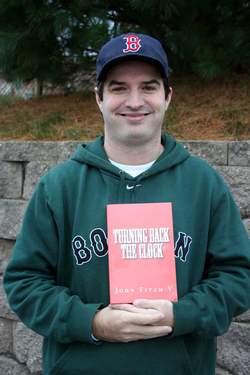 John Fitch V; it is spoken as John Fitch The Fifth.

Right now, I’m between projects. In November, I completed a 54,000-word story that involves zombies in Tombstone, Arizona. In January, I’ll begin brainstorming my next project, which I expect will be a James Bond-like sci-fi story with a female protagonist.

Definitely Lord of the Rings. I don’t think a person can be a fantasy author today without being affected or influenced by Professor Tolkien’s work. My father handed me The Hobbit when I was 11. R.A. Salavtore’s work has also been inspirational, since he’s a local author, as well as Robert Cormier’s work.

Great question. I’m a self-published author, so I usually get the “Oh, your work isn’t good enough to be published” spiel. Personally, I think that’s bogus. I support a lot of small-time authors because I want to be supported just like that. There are some self-published authors that are fantastic but are left out in the cold or mainstream publishing because their work is not “trendy” enough.

I think the main strength about books is that they never go out of style, especially if that book turns out to be a classic (read: Harry Potter). Weakness in novel-writing… that’s hard to say, since I don’t believe books have weaknesses.

Truthfully, I don’t think I’d be able to do what I do without technology. I couldn’t use a typewriter, because I will occasionally hit the wrong keys (I love backspace). E-mail is always fantastic to forward files back and forth to my girlfriend, who is also my editor. She wants me to start using Drop Box to exchange files, so I’m giving that some thought. And Steven Savile, a British author who writes fantasy fiction, is trying to convince me to use writing software. So we’ll see how that goes.

Don’t ever give up, and always bust your ass. I’m the kind of person who always wanted to prove the doubters wrong. Let’s face it: We live in a world where people just enjoy putting others down, and some people are jealous of writers because of the talent we have; these are the people who can’t string two intelligent sentences together. So if someone told me “Oh, you could never write a novel,” I’d tell them to kiss my ass while I went out and busted my ass and pounded the keyboard. I’ve written 10 novels, published five of them, with my sixth coming out in April 2010. I’m the only one I truly have to please, and I have to say that I am very proud of what I’ve accomplished in my seven years as a novelist.

My web site is JohnFitchV.com, which is really a one-stop place for everything related to my writing. I also have a Facebook fan page as well as a Facebook profile, and I blog on LiveJournal.

Right now, I’m looking over at Vince Flynn’s newest, Pursuit of Honor. I enjoy Flynn’s bad ass character Mitch Rapp, and you can say I’m inspired to write my female James Bond-ish character almost like Rapp. I like the way Flynn gets inside the heads of terrorists; it’s actually scary the way he has these antagonists thinking.

Other than the heat coming up in my house? Not too much. When I write, I either do silence or Star Wars soundtracks. For some reason, I focus better with a little music.

I’m currently promoting my latest novel, Turning Back The Clock. It’s the story of two Red Sox fans who go back in time following the 2003 American League Championship Series and they work to stop the sale of Babe Ruth as well as the Black Sox Scandal, two events they believed are linked together.