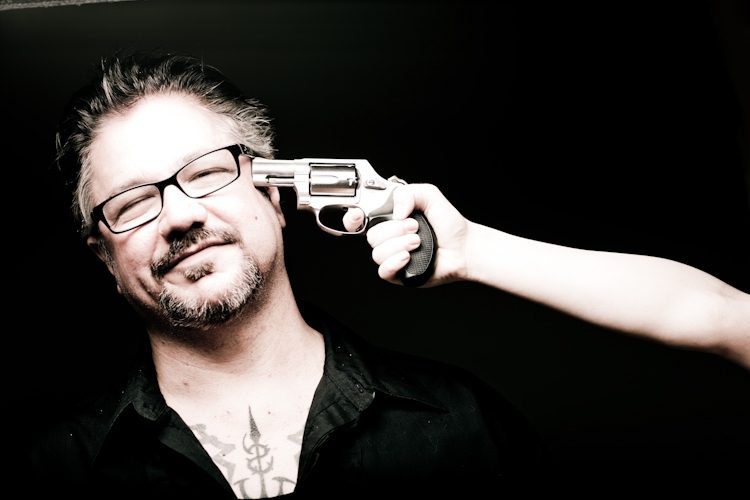 I lie like a dog and make up the most ridiculous shit imaginable and sell it to you for as much money as I can. This makes me pretty much the same as any other writer. I like that writing is about one step removed from grifting. Writers and carnies have a lot in common. We have to jump up and down to sell you our goods, scream at the crowd, do a little dance can promise you two headed babies, talking dogs and angels getting fucked by Harry Potter’s lollipop-farting unicorn. It’s just part of the job of being a writer. Writing is a silly way to make money, but the only other people who get paid to lie for a living are carnies, cops and hookers and those jobs are way too much work.

I just finished up Sandman Slim 2: Kill The Dead. It’s the first sequel I’ve written and it just about killed me. When I only wrote standalone books I could do pretty much anything I wanted to my characters. Kill them, ruin them or fuck them up any way that amused me as a writer. All of a sudden with this book, I had to care about all the terrible things I’d done to these characters in the previous book. Plus, I had to think of new terrible things to do to them while setting things and up for the third book. It was a whole new way of thinking and I learned a lot from slogging through it. And I hope to hell this remains the hardest book I ever write, but that’s never going to happen.
what has had the greatest influence on your work?

Other books and writers, obviously. William Burroughs was a huge influence when I was starting out. J.G. Ballard was another. Elmore Leonard and Barry Gifford taught me to simplify and streamline my prose.

Music is a big influence, too. Early LA and New York punk was the main music of the young me and I have a lot of references to it in my. I’ve also been listening to electronic music since I was a kid. I was introduced to it at a very young age in New York. I don’t remember how young, but it was younger than 10. Maybe six or seven. Ever since then I’ve been fascinated by machine-generated, distorted and unnatural sounds. When I’m working I’ll often have on mild electronics like mid-70s Tangerine Dream or a more recent band with a similar sound, Redshift. When I want something noisier or moody I listen to Lustmord, Controlled Bleeding or William Basinski.

Visual artists have had a big impact my writing. The Surrealists, especially Dali, Ernst and Tanguay. Also photographers such as Joel Peter Witkin and John Santineros.

There plenty of movie influences in my work, too, but you can find those all over Sandman Slim so I’m not going to go into them here.

I don’t own as many guns as Stark, but I used to drink like him.
what do you see as the main strengths and weaknesses of the medium you work in?

10 years into the 21st century, books and publishing are finally catching up with the late 20th century. It wasn’t that long ago that Dickens could walk into any publishing house in New York and feel right at home. Publishing was still a horse cart and buggy whip kind of business for way too long. No matter how many computers they had or how much online advertising they did, publishing was still stuck in a business model straight out of the 19th century. Online publishing, print-on-demand, and strange, wonky little devices such as the iPhone and Kindle have blown up publishing in a big way. Publishing is where the music business was a few years ago. They don’t know what they want to be when they grow up, but for the first time they’re taking the question seriously.

I couldn’t do 90% of what I do if I didn’t have friendly, relatively non-crashing machines around me. My handwriting looks likes a mental patient scrawled his Oedipus complex nightmares on a wall in his own shit. Even typewriters were deadly for me because I was such a terrible typist. The manuscript for my first novel weighs about 15 pounds because of all the white out and staples holding together all the mismatched paper I used to cobble the thing together. Word processed manuscripts don’t have the character of those old piles of scrawled paper, but I’ll take the ability to actually get the words down in a readable way over amusingly eccentric manuscripts.

I also do a lot of photography and I couldn’t live without Photoshop. It saved my life and whole photo shoots more than once. God bless you, Adobe.

There’s only one piece of advice that’s worth a damn: Don’t kill anybody and don’t kill yourself. Anything else that comes along can be dealt with.

The City & The City by China Mieville, The Boys by Garth Ennis and  Voluptuous Panic, a book on Weimar Berlin.
what are you listening to at the moment?

Shortwavemusic by William Basinski and the new Tom Waits live album, Glitter and Doom.
anything else we should know?

You’re going to be dead a lot longer than you going to be alive. So, fuck things up and have fun now while you’re something more than a sticky patch of whining ectoplasm stuck to the bottom of God’s Crocs.