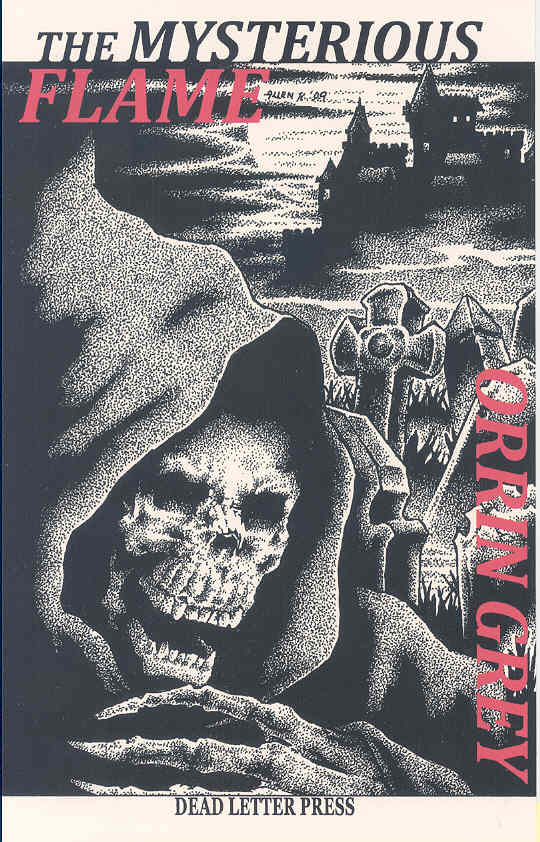 what is you name?

how would you describe what you do?
I write short stories. Most of what I write is weird or supernatural, but I’m not really in it to be scary or examine the dark side of human nature or any of that. I primarily write because I want to have fun, and I want the stuff I write to be fun, and what’s fun for me just happens to be monsters, ghosts, old dark houses, cursed books, ape fiends, haunted movie theatres, resurrection men, and mad monks.

I’m particularly attracted to the supernatural, and I’ve got a lot of opinions about how I like it best that I’m generally happy to go into at a moment’s notice. Basically you can sum it up by paraphrasing Mike Mignola when he said that the supernatural shouldn’t have rules and that it should contain stuff that’s “beyond human understanding.” My favorite supernatural stories always have some mystery in them, something that never gets explained.

what are you currently working on?
I’m a big fan of short stories, and I’m always writing those at any given time. I’ve got several coming out from various places in the not-too-distant future, and I’m hoping to get enough of them together to put out a collection in the next year or two.

I’ve never done anything novel-length. My longest work to date has been a novella called THE MYSTERIOUS FLAME that Dead Letter Press put out as a chapbook last year.

what has had the greatest influence on your work?
Two words: Mike Mignola. Seriously, I’ve got a lot of inspirations, and I tend to wear them all on my sleeves, but Mike Mignola’s art and storytelling style have really been huge, huge influences on my work (see the above quote about the supernatural). A lot of my other big inspirations I found through names he dropped in interviews and author’s notes. I was already into comics and monsters and weird fiction and pulp adventure before I discovered him, but his stuff really helped me clarify those interests into what they are now.

I read a lot, and I was influenced a lot by reading Lovecraft and the authors he read and that were inspired by him. From Poe and Hodgson and M.R. James to people like Fritz Leiber, Roger Zelazny, Brian Lumley, etc. Besides that, I’m a great fan of old horror movies like Hammer horror, the Universal monster movies, anything with Vincent Price, and so on. Since I love monsters so much, I of course love Ray Harryhausen.

There’s also a ton of other contemporary creators that I’m absolutely enamored with, and I’m always discovering new ones, so that list could go on and on forever.

what is the greatest misconception about you or your work?
Well, I think the biggest misconception is probably that people outside the genre have pretty narrow ideas of what they think fantasy or horror or science fiction are. When I tell people what I write a lot of them think of horror, and when they think of horror they think of Stephen King or slasher movies or whatever, and my work doesn’t really have a lot in common with most of that stuff. There’s a huge wealth of different kinds of writing within what gets classes as horror or fantasy or science fiction, and I think a lot of people who aren’t active in the genre are unaware of it.

what do you see as the main strengths and weaknesses of the medium you work in?
So far I’ve mostly only ever done prose, though I’d love to try my hand at writing comics one day, and the big downside of prose, for someone like me who is so influenced by movies and comics, is that it’s not a visual medium, so I have to try to get all those visual tics and such into the text in the form of mood or theme or atmosphere or what-have-you.

how has technology impacted upon the work you do?
I’ve never really written without a computer, so I don’t know if you call that impact, but the rise in digital technology and e-readers and more and more people having constant access to the Internet has made it a lot easier to network and submit to different markets, and also changed the nature of those markets pretty drastically. There are fewer and fewer printed venues for short stories and more and more Internet-only models, not to mention things like podcasts and so on.

where can we find you online?
I have a website at www.orringrey.com where you can find my bibliography and ‘blog, as well as links to my Twitter, Facebook, Goodreads, and LiveJournal accounts. I also do a twice-monthly column on international horror cinema for Innsmouth Free Press.

what are you reading at the moment?
I read a lot, so that changes from moment to moment, but I just finished Mike Mignola’s latest Hellboy collection THE CROOKED MAN & OTHERS, and it was predictably wonderful and has gotten me on a Manly Wad Wellman kick. He’s long been a favorite of mine from among the old Weird Tales writers, but I’d not read more than a shamefully small handful of his stuff prior to this, so I’ve been checking out the wonderful collections of his supernatural stories that Night Shade put out awhile back.

I’m also eagerly awaiting my copy of the BEASTS OF BURDEN hardcover by Evan Dorkin and Jill Thompson. I’ve read several of the stories from it already, and they’re some of the best supernatural comics being published right now. Their protagonists just happen to be a bunch of dogs (and a cat).

what are you listening to at the moment?
I recently discovered Josh Ritter and I’ve been listening to his new album SO RUNS THE WORLD AWAY, and then just a couple of days ago I got turned on to Wolfgang Parker who does punk-infused swing that is just awesome.

When I’m writing I tend to not listen to anything with a lot of lyrics, so I mostly do movie scores and the like. The ROAD TO PERDITION soundtrack is one of the best writing CDs in my library.

anything else we should know?
I’m sure, but odds are you’re asking the wrong guy.

One thought on “orrin grey”