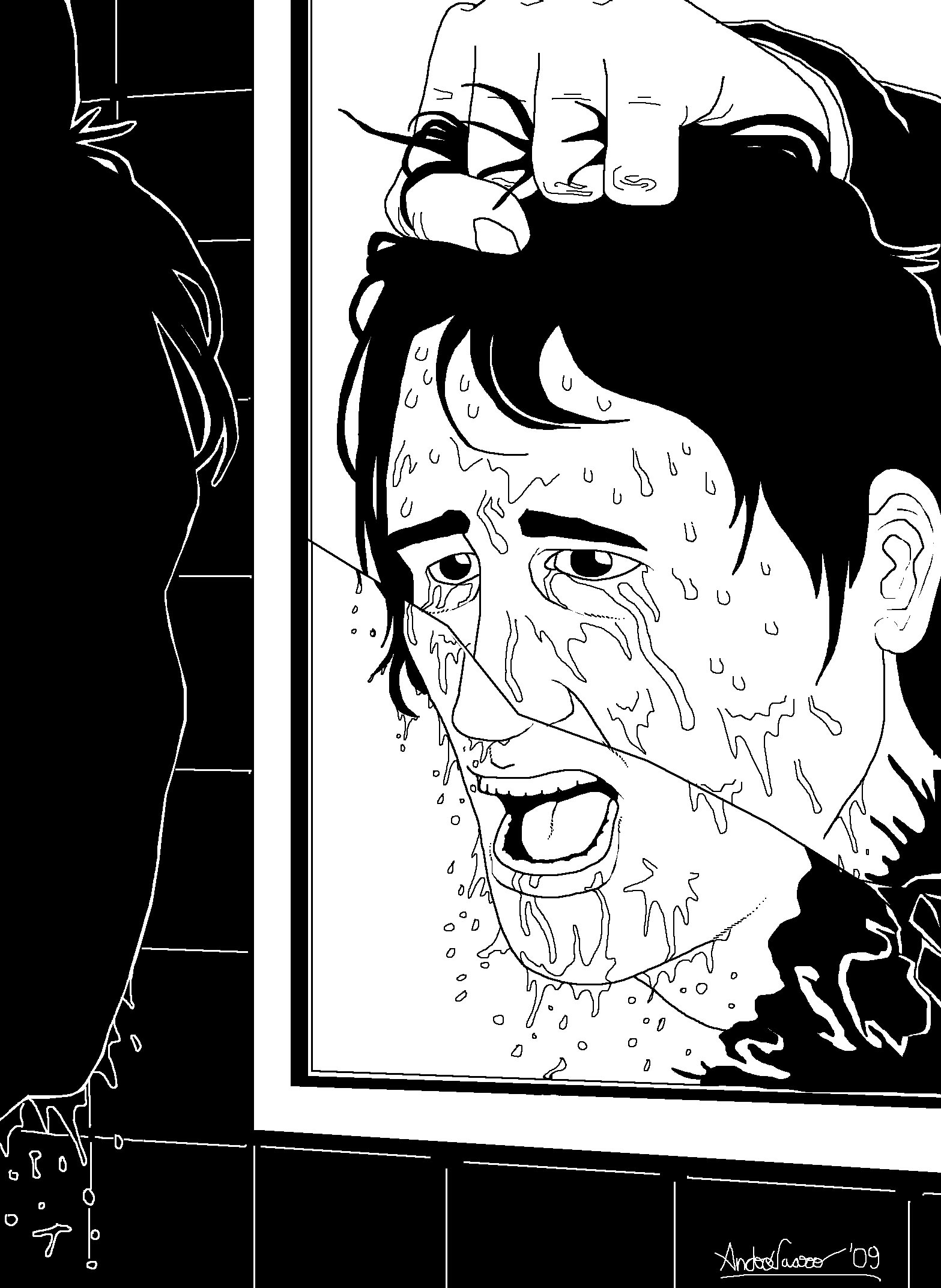 I try to be versatile. “Writer” doesn’t really cover it, because I also draw and animate in Flash. “Storyteller” brings to mind the image of a creepy old man at a campfire narrating scary tales to a bunch of kids before picking one to rape. Please note that when I said “brings to mind” I meant MY mind, which, as you’ll notice throughout this interview, doesn’t tend to think of nice things very often. I think “narrative artist” works, though — I write fiction, I draw a webcomic and the covers to my own fiction when I publish them on http://www.weaponizer.co.uk/“, I make flash animations and, as a hobby, I also review works in three narrative mediums: comics, movies and games. I might start adding novels to that when I find enough time to read them regularly, since I’ve been so busy I feel like this whole “24-hour-day” thing is a bullshit myth.

Active projects: I’m writing a sci-fi novel called “Ares”, currently 23.000 words into the second draft. It’s about the construction of a large spaceship, ARES, in Earth’s orbit and the seven astronauts who find themselves in a desperate situation during its second mission. It’s currently my main project, requiring loads of research and thorough revision. Tough, but satisfying — well, not that satisfying yet, but hopefully it will be. If I keep a regular work schedule it should be published in Print-On-Demand and E-Book formats after February. All I know is that it won’t be finished BEFORE February. It’s been in the works for a year and a half — hell, perhaps two. The other project, aside from mantaining http://andrenavarro.wordpress.com/ , is writing fiction regularly, mainly for http://www.weaponizer.co.uk/, which has recently received an extreme makeover and is looking gorgeous. Projects for the future: a noir graphic novel with the provisional title of “Morris” (to be changed due to its similarity to “Ares”, which is a final title) about an LAPD detective in the near future who had his life drained by a two-year long case which, as the icing on top of a shit cake, results in a terrible personal catastrophe that pushes him over the edge. Artwork will be stark black and white provided by me. A flash animation to the sound of Goldfrapp’s superb song, “Utopia” — which will require the most meticulous and difficult animation process I’ve ever tried. And there’s a shitload of other things waiting as well, but that’s enough for now, as they’re so many that if I try listing them I’ll start crying again.

I think the person who kick-started me on the general direction of art was Charles Chaplin. When I was fourteen or fifteen, my father showed me one of his movies on a TV channel, and I found it hilarious (his second film, Kids Auto Race At Venice). I sought the rest of his work and fell in love with it. Furthermore, the consistently amazing work of my favorite writer, Garth Ennis, as well as movies like “Carlito’s Way”, cemented my love for narrative arts and my wish to create them. There’s a bunch of other influences — Warren Ellis, Alan Moore, Chan-Wook Park, Bill Hicks and so forth. I try to extract a lesson from anything, even — perhaps especially — when it’s a “how NOT to do it” kind of lesson, like when I’m watching a Paul W. S. Anderson film.

About my work, I’m not aware of any. About me, some people complain I’m negative and pessimistic — which I am, but I exaggerate it online to have a sense of humor about myself. In real life I’m amiable and smile (way too) often.

For publishing fiction on the Internet — easy to get readers, hard to keep them. The constant flux of information on the web keeps your attention diverted, making it hard to concentrate — I mean, I have about thirteen tabs open right now — but it’s much easier to expose your work to a relatively large audience (as in, someone other than your mom). For writing a novel — it’s gratifying to build something so complete, so full of information, detail and with more than enough space to develop characters — it’s also very tiring and occasionally frustrating to think of enough subplots for the book and come up with good enough reasons for their existence so they won’t be mere filler. It has to be thoroughly planned, and it’s so easy to miss something during revision and end up with a huge plothole or inconsistency. For drawing a webcomic — excellent outlet for my dark sense of humor and the format I chose allows for fairly quick production — but coming up with something worth making a joke about is always a challenge, which is why I always keep five or six strips ready in advance. I’m very afraid of authoring one of those comedy webcomics that forget the punchline, replacing it for pseudo-witty dialogue or falling into repetition. For animating in Flash — creating something like a flash animation from scratch is immensely gratifying — it also requires immense amounts of patience, and I always had ideas for flash animations I couldn’t follow through with because I don’t have access to a team of voiceover actors. I’m thinking of ways around that.

Don’t lie to an artist. Don’t tell him his work is good if you don’t think so to make him feel better, because ultimately you’re fucking him over. Be honest but constructive. And if you’re an artist, ask the same, but be mindful of who’s giving you the advice — if the person uses “LOL” a lot and commits too many grammar mistakes in a single sentence, don’t feel bad if he doesn’t consider your latest project a masterpiece (but if he does you’ll feel good anyway, won’t you?). And if you get a lot of praise, cheer up but don’t believe the hype. Always doubt your own work. Be your own worst enemy regarding criticism. It hurts, but it helps you evolve.

My website contains all my work, either in it or linking to it. Check the Categories column, where I’ve organised pretty much everything on the site as neatly as I could:

“The Physician”, by Noah Gordon. Well-researched and good characters, although the prose is a bit basic and uninspired. Also badly-translated — the mistakes start on the damn title, “O Físico”, which in Portuguese means “The Physicist”. I’m always reading comics — I don’t like superheroes, so I’m inclined to writers like Garth Ennis and Warren Ellis. Also a lot of research for “Ares”.

When I started answering this interview, “Sad Connections” — a gorgeous piece from the “Sympathy For Lady Vengeance” soundtrack. Also listening to the soundtrack of “Oldboy” (one of my favorite soundtracks of one of my favorite films). I’ve recently become a fan of Goldfrapp and I’ve been enjoying Electric Six. The terrible “The Princess And The Frog” gave me an urge to listen to the soundtrack of some Disney films which are actually good, by masters like Alan Menken and Hans Zimmer.

When that picture was taken, I had just shaved most of my beard, took the pic, and shaved the rest. I don’t actually have a moustache, although some people insist shaving it off was a bad idea, and others are still on their knees in gratitude to Heaven that I didn’t keep it.