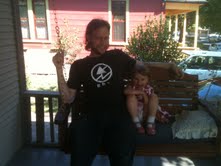 My name is Dustin Paul Weaver.

I draw comic books, which is comparable to being a film director, I think. Like a director, a comic artist works from a script and
determines how to tell this story in a visual medium. The big difference is that where a director brings in a lot of other people–
actors, cinematographer, story boarders, set designers, etc.– a comic book artist does most of it alone. I’m the set designer, the costume designer, and all of the actors, and I’m choosing the shots, handling the lighting, and doing all the special effects.

On top off all that, a comic book artist can employ techniques used in painting and illustration, from the abstract to the realistic, to
create something visually engaging.

I’m currently the cover artist on Avengers for Marvel comics, and I’m working on a 3-issue story arc that will be published in Avengers
#7-9.

In my “spare time” I’m slowly chipping away at a comic that I am writing and drawing. I’m planning on releasing it for free online, in
weekly installments starting ether in the summer or fall of 2013.
what has had the greatest influence on your work?

The greatest influence on my work is my friendship with fellow comic book creator, D.J. Bryant. He’s a very smart guy with good taste. Many of the books that I’ve really loved and been inspired by I’ve read at his recommendation. And when I’m creating something, whether or not I think it’s something D.J. would like is something I think about.

Maybe it’s that I LIKE drawing buildings or that I LIKE drawing a lot of detail. I don’t “like” drawing these things so much as I like drawings OF these things. If you think drawing hundreds of little windows on buildings is fun for anyone, you’re mistaken. But when the
result is a fully realized city-scape, or a car engine, or what ever else has a lot of detail, and it comes out just as you imagined it,
the reward of having done it is great. I’m just trying to create something that I would like. Most of the time doing that is hard work.

Comic books are visual. They can grab a reader’s attention and provide a similar accessibility to that of movies and TV. But, going back to the first question, unlike movies and TV, comic books are created by a very small group of people and in many cases just one person. In this way they are more like literature in that there is a lot of creative freedom.

Comics also have the ability to use the strengths of both images and words, which makes them a powerful storytelling medium.
I think the biggest weakness this medium has is that the perception most people have of what comic books are and what they can be is still limited to the super-hero genre. Comic books can tell any kind of story. It needs the general audience to recognize that and be open to it before it can really take off. If you’ve never read a comic (or graphic novel– same thing) because you’re not interested in
super-heroes, maybe look a little deeper. I love comics. I’m almost always reading one, and it’s almost never a super-hero comic. (That
isn’t a slam on super-hero comics.)

I guess I like doing things traditionally. I don’t use any 3d modelling or figure posing programs, and I don’t think I ever will. I
don’t do much digital drawing ether, though I’m not opposed to using digital tools and media for creating an image. I do do some clean up to my work in Photoshop but that’s about it.

I struggle with the idea of giving advice. I think good advice for one person might not be good for another. If I imagine that I am giving
advice to myself, say ten years ago, I would say: Do things the way you want to do them. If someone tells you this is how to make comics and this is how to have a successful career, don’t listen. Don’t compare your work or your career to anyone else’s just because you think they must be doing it the right way. There is no right way, and everyone has their own trajectory. Like what you like. Do things the way you want to do them, and try to do them really really well.

Again, I don’t think this advice is for everyone.
where can we find you online?

I have a blog at http://dustinweaver.blogspot.com

And if you want to see my art but don’t want to read my rambling stupidity, I have a tumblr at http://dustinweaver.tumblr.com/

I’m reading the first Jaime Hernandez Love and Rockets book, “Maggie the Mechanic”. So many people love this stuff, I figured it was time I found out what all the fuss is about. I’m not that far into it. I’m excited to see how it evolves.

I recently finished Osamu Tezuka’s “Barbara” and I really enjoyed it. He’s the best.

I’m getting Brandon Graham’s “Multiple Warheads” and James Stokoe’s “Godzilla- The Half-Century War” whenever a new issue comes out.

Oh and this may seem silly, but I’m reading the manga version of “Return Of The Jedi” by Shin-Ichi Hiromoto. It’s just an adaptation of
the film, but the things Hiromoto does with page layouts are so great. He puts so much drama and life and FUN into it. This is work not to be dismissed.

The albums that I have in heavy rotation right now are Blonde Redhead’s “23”, Brian Eno’s “Before And After Science”, Broadcast’s
“The Future Crayon”, Crystal Stilts’ “Alight of Night”, David Bowie’s “Low”, Ennio Morricone’s soundtrack to “Il Grande Silenzio”, and the
latest Guided By Voices album (I think. I can hardly keep up with Pollard’s productivity.)

I can’t think of anything.

One thought on “Dustin Weaver”