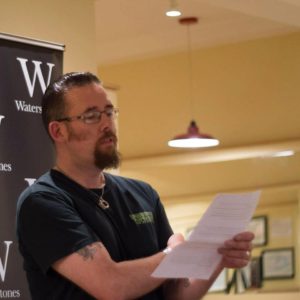 what is your name?
Steve Toase
how would you describe what you do?
I’m a writer. I mainly write fiction, and often flash fiction. Unsettling little stories that get under your skin. I also write for magazines, on subjects ranging from custom motorbikes to folk horror, and I’m a regular reviewer for Fortean Times.

what are you currently working on?
At the moment I’m in the final stages of getting my first novel ready for submission. I’m also writing some new short stories, and I’m working on some articles for the FolkloreThursday website.
I’m getting ready for the next stage of Haunt. Haunt is a project about how people experiencing homelessness in my hometown of Harrogate are haunted by the opulent identity of the town (I was kicked out of home at 16, and the project drew on some of my own experiences, as well as those of my fellow writer Becky Cherriman, and people currently experiencing homelessness).
I’m currently in the planning stages of a group show with some other writers and visual artists, which will be exhibited November.

what has had the greatest influence on your work?
I think growing up in the seventies and early eighties. This time was one of unsettling narratives in fiction and the news when dark storytelling was very much to the fore. Everything from the Usborne paranormal books, to Tales of the Unexpected, to Chocky, Dramarama and Scream comic. Beyond a certain aesthetic (which can be seen today in projects like Scarfolk) there was an approach to the unseen that has really influenced the way I approach themes.
The second thematic influence is embodiment as explored by Lackoff and Johnson in Philosophy in the Flesh, and expanded on by Elizabeth Teather in Embodied Geographies. The idea that we experience the landscape through the physicality of our bodies, ableist spaces, changing experiences as our physicality changes throughout our lives. This was a major influence on my archaeological research and has seeped into fiction, for example in my medical horror story ‘Not All the Coal That Is Dug Warms the World’ (http://talestoterrify.com/tales-to-terrify-275-frances-silversmith-steve-toase/)
Specific fiction writers? Angela Carter, Neil Gaiman, William Gibson (particularly the Blue Ant Trilogy), Alan Garner, Robert Holdstock, Ray Bradbury, Warren Ellis, China Mieville, Alan Moore, Priya Sharma, Lauren Beukes, and Laird Barron.

what is the greatest misconception about you or your work?
I think the greatest misconception about flash fiction is that it’s easy, because it’s short. In some ways it’s a very different discipline. It has to be a story and with so few words available every word must count, often doing a couple of jobs. Your building a world in brevity.
6. what do you see as the main strengths and weaknesses of the medium you work in?
The main strength is portability, both in terms of creation and consumption. Most art forms involve some form of ‘stuff’, whether that’s instruments, easels, paints etc. Writing? I can make stories with a napkin and a pen, particularly flash fiction.
This also carries across into how people consume my stories. Every year I write a month of flash fiction in the run up to the winter solstice (short story day). One of the comments I got again and again was from friends with small children. They said that as the stories were all fairly short they could easily read them on their phone while doing childcare (I can sympathise with this as a stay-at-home dad). The weakness is there are still not a huge amount of markets for flash fiction, but it is changing.

how has technology impacted upon the work you do?
I’ve never known any different. I’m quite late to writing for a living, only starting in 2007 when I was 32. By the time I was submitting work, computers were ubiquitous, and most magazines took submissions by email or online submission system. I find homes for many of my stories via Duotrope (www.duotrope.com). Via the internet I’ve been published in Canada, Germany, US and Australia. I doubt I’d have made as much progress as I have without that technology.
8. what’s the greatest piece of advice you would like to pass on?
Have a good mix of creative people around you. Don’t just share ideas with writers. Get together with painters, musicians, dancers, and sculptors. Talk with architects and drink tea with actors. The best inspiration comes from those varied conversations. Also, if you want feedback on a story don’t just give it to writers. They will give you good feedback, but only one from a writer’s perspective. Give it to people who you want to read it, ie the general public.
where can we find you online?
http://stevetoase.wordpress.com/
facebook.com/stevetoase1
https://twitter.com/stevetoase
http://www.imovearts.co.uk/current-projects/haunt/
I also have a newsletter I send out every couple of weeks at http://www.tinyletter.com/stevetoase

what are you reading at the moment?
I’ve just finished Jeff Vandermeer’s excellent Southern Reach Trilogy.
what are you listening to at the moment?
First Aid Kit. Lots of First Aid Kit
Also I’ve got China Miéville’s two latest books on audiobook (October: The Story of the Russian Revolution, and The Last Days of New Paris)
anything else we should know?
I like a good musical. Oliver. Bugsy Malone. Jesus Christ Superstar. Wickerman. All good.
any suggestions for who we should interview next?
Leah Moore and John Reppion
Cat Vincent
Paul Duffield
Virginia Mohlere
Max Gee
All good people.