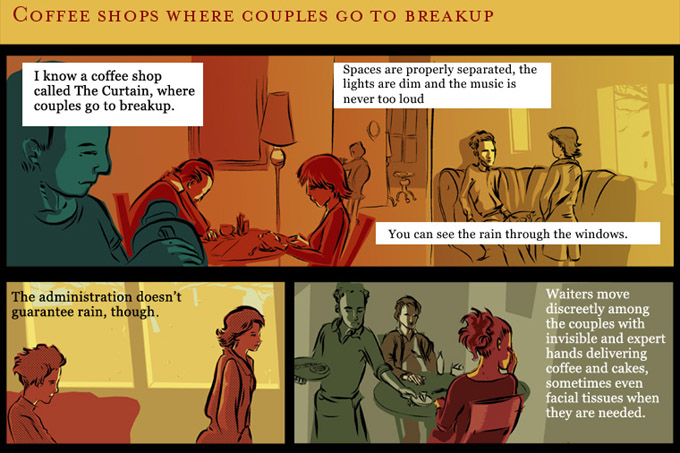 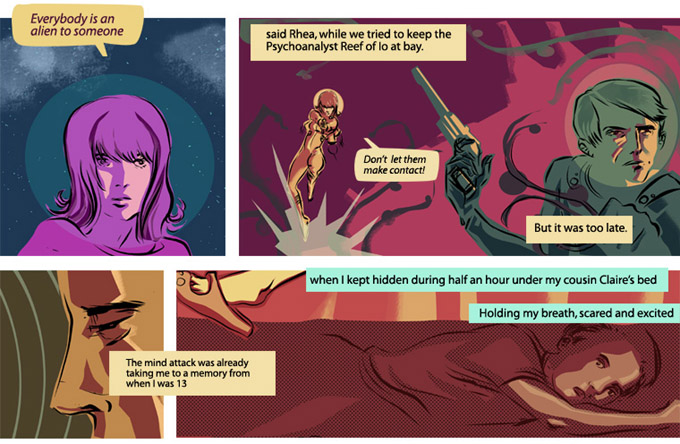 Comics, short tales in comic form, under the name “The Secret Knots“. I think of The Secret Knots as an online, growing book of tales. I’ve also described it as “slow motion soap opera”

A comic about the brother of a famous and influential writer of the past who gets obsessed with his brother’s persona. It adds to this other comic called Music and Pie in a series of biographical comics about fictitious characters.

Reading a lot of Borges and Cortázar probably, the notion of literature as means and end at the same time. Impressionistic depiction of emotions and reactions in some Japanese novels. Neil Gaiman’s comics and books. The work of many artists I’ve met in the Internet, countless illustrators, particularly the color in the work of bande desinée artist Bengal. The online comic A Softer World which was a big inspiration to start doing webcomics.

I wouldn’t say misconceptions, but often I leave room for interpretation and it’s always interesting to see how some readers really get away with their ideas to unexpected places sometimes. I enjoy it and don’t feel the need to “clarify” anything, I don’t think there’s much to clarify in these cases.

Comics are a fascinating medium for storytelling. Telling stories and transmitting ideas through images and words seems natural, almost like the obvious way to do it. I like the way comics let the pacing and the rhythm of the story work in a consensus between the object and the viewer.

Weaknesses? It may be a slow medium to work with, depending on the kind of illustration.

Posting comics on the Internet has certain specific effects, like immediate feedback, the chance to reach ‘casual’ viewers who get to your site through portals like stumbleupon or reddit; the screen reading also determines technical aspects like page layout, font sizes and such. But probably more interesting than that is that certain topics or genres seem to benefit specially from the online transmission: journal comics, brief stories, niche topics. Poetry. Experimental fiction.

I read somewhere that Grant Morrison said something along the lines of “dont be close-fisted with your ideas.” Use them, do not save them for later, for the great saga, play or movie that you expect to make someday. Use your ideas and trust that more will come. If you read Morrison’s Doom Patrol you know exactly what that means, every page seems filled with such high concepts, over the top ideas and bizarre characters. It’s an electrical read, a synaptic show.

The Secret Knots is www.thesecretknots.com

I’ve got a Livejournal at santapau.livejournal.com
And I notify of new comics in twitter with the user name santapau.

Yes. Recently there was this huge earthquake in my country, Chile. If you’d like to help, there’s this google link: http://www.google.com/relief/chileearthquake/

and probably there’s a local Red Cross near you that may be receiving support.